Ok time for a mini whinge. Hey i did warn you first.

Recently Playstation Access had a competition running, it was to design a cover for their magazine. Now i'm rubbish at this kind of thing but i did mention it to hubby and said he should enter as he is great with photoshop and very creative.

Anyway the other day i noticed the winner announced. It was a really good entry and i had a feeling it would win so i was really chuffed for him. Now the next bit might sound like sour grapes, in part it is as i really thought hubby stood a chance of getting picked to at least get his work in the magazine. He did follow all the guidelines set out in the rules and the image was good quality. The topic was "Gaming takes over the world" I'm thinking maybe they didn't like his entry because it didn't actually advertise "Sony" as such.
Quite a large amount of entries were picked to feature in the magazine, many more than i thought they would feature.Some are really good, others not so *in my opinon. Anyway my main gripe is that one of the entries was a stolen one that was taken and wrecked.

The original is here by someone called torsor , it's very good.

The competition entry which is torsor's image but squished with an picture of earth added is here, take a look at the comments. Even torsor spoke up.  Stolen image

The picture below shows the entries that will feature. The row above the last one shows that this image and it will be used and featured in the mag. I find that quite disgraceful if they don't plan to credit the original artist. torsor is obviously talented and if you're going to feature someone else's work at least let them know and at least ask their permission. It is good manners after all. 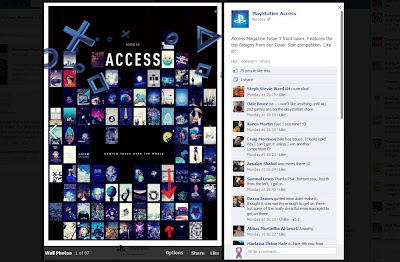